Cheapest gas in the United States

(WASHINGTON, December 29, 2014) Average gas prices in two states – Missouri ($1.93) and Oklahoma ($1.98) – have dropped below $2.00 per gallon for the first time since 2009. The national average has fallen 95 days in a row for a total of $1.06, and prices have plummeted $1.38 (nearly 40 percent) since the start of June. The national average price for regular unleaded gasoline is $2.29 per gallon, and motorists are saving 11 cents per gallon compared to one week ago, 49 cents compared to one month ago and $1.02 per gallon compared to this same date last year. AAA estimates that drivers are saving more than $500 million per day each day compared to the highs in both the spring and summer. 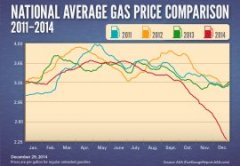 The average price at the pump is below $2.50 per gallon in more than two-thirds of all states (38). Drivers in the Midwest continue to pay the lowest averages in the nation, while the most expensive prices in the continental United States are in the Northeast continue to pay the highest averages in the continental U.S., led by New York ($2.81), Vermont ($2.74) and Connecticut ($2.69). Hawaii ($3.53) and Alaska ($3.09) remain the nation’s most expensive markets for retail gasoline and are also the only two states with averages above $3.00 per gallon.

Consumers in every state and Washington, D.C. are experiencing weekly savings of a nickel or more per gallon. The price at the pump is down by a dime or more in 25 states, and drivers in Michigan (-17 cents), Nebraska (-16 cents) and Ohio (-16 cents) are saving the most per gallon week-over-week. Over the past two-weeks, the average price at the pump has tumbled 15 cents or more in every state and Washington, D.C. Half of the states have seen retail gas prices drop by a quarter or more over this same period, led by dramatic drops in the Midwest: Michigan (-41 cents), Indiana (-39 cents) and Ohio (-38 cents).

The average price is 30 cents lower in every state compared to one month ago, and 19 states are posting savings of 50 cents or more per gallon. Drivers in four states are experiencing month-over-month declines of at least 75 cents: Michigan (-84 cents), Indiana (-77 cents), Ohio (-76 cents) and Idaho (-75 cents).

The lowest gas prices in the United States are in ... 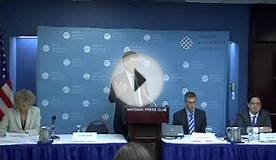 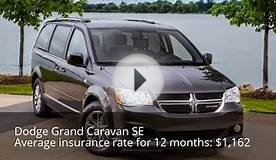 Top 10 Cheapest Cars To Insure in the United States 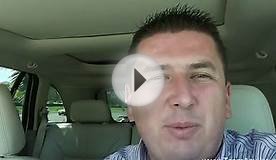 Most Expensive Gas in the United States?
Related Posts
Categories
Latest Stories
Cheap gas Detroit Where are the Hummers when we need them? With gas prices expected to drop...
Cleveland Gas Company If you are one of the lucky residents of Cleveland, you have the ability...
Dryer Gas Line Seal the dryer gas line pipe threads with gas-rated tape or pipe thread...
Grilling burgers on Gas Grill Directions Get the grill going. Go ahead and light the grill and set it...
Natural Gas powered Generators Economical. Reliable. Sustainable. MTU Onsite Energy s natural gas generator...
It's Interesting...

Corporación Trebol Gas C.A. is a Venezuelan privately owned oil company reporting 280 gas stations located in every state of the country and about 16% of the oil distribution market in Venezuela. Trebol was founded in 1998 and is a chain of gas stations, each operated by a franchisee. Almost every gas station has a convenience store and sells...

@Surf❗️: Jersey has the cheapest gas in the country🙌🏾😩.